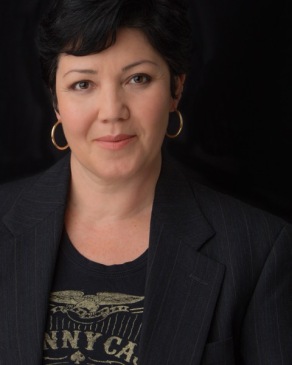 A: Latina, Nerd. I was raised on Star Trek and David Bowie.

Q: Tell me about Fabulous Monsters.

A: I wrote Fabulous Monsters because I had just recently seen Joan Jett in concert  and I heard an NPR interview with Linda Ronstadt about her Parkinsons diagnosis and Melissa Etheridge, who had breast cancer, said in an interview that women guitar players seemed to get a lot of cancer. It sparked an idea about writing a play about rock and roll survivors from the female perspective.

The play takes place in the 70’s and the present, it’s not what I would call a musical but there is a lot of music in it.  I got to work with Moises Vasquez, who wrote me some pretty awesome punk songs. I’d like to add more!  It’s like working at a smelly punk club, which was my happy place as a teen.

A: I’ve been working on a play about a young cousin who was recently killed by a drunk driver. It’s named after a Tupac song: “Picture Me Rollin.” It’s a very simple piece and I’ve gotten very good response for it. It’s going to be featured at the 35th annual William Inge Festival in Independence, Kansas.

A: I have been a mildly successful actress all of my life, nothing too flashy, but I always worked. Then the time came where there were no roles for me! None. I’m not THIS enough, I’m too much THIS, I’m too old, I’m too young.  My face is so, so… LATINA. Meh.

I decided to write for myself. I wrote the play SILUETA (With Chris and Tom Shelton) as a two hander that I could do with my partner, we could take our young child on the road, I could work as an ACTOR, you know? (Don’t get me started on childcare in the theatre!) It’s about the life and death of Cuban artist Ana Mendieta and her husband Carl Andre who was accused and acquitted of her death. On a whim I submitted it to The Great Plains Theatre Conference and we were accepted. That started me on the road to thinking I could pursue writing, as I found I loved it, and I had so much more power in the room than a mere actor.

My mandate is to write great roles for women.

Also I have to praise the actors who have played roles I’ve written and made them better in the process: Mercy Vasquez, Jennifer Parsons,  and Julianna Stephanie Ojeda. Having a great actor tackling your work will only make the work better.

The Latino Theatre Alliance of Los Angeles for believing in me and giving me space to write.

William Mittler, Eric Eberwein and Karen Carpenter for giving me a chance to be heard by a wider audience.

A: Write what you want. Write what excites you. Pass the Bechdel test. Meet other playwrights and listen to their work with an open heart. Breathe when you write. Questions are the weakest form of dialog. Don’t give up! Don’t be shy. Submit, submit, submit your work! Be your own best advocate. Join the New Play Exchange. Write great parts for women. If a good actor has a hard time memorizing something you’ve written or if they bump up against something. reexamine it. Maybe by changing it, you can make it work. Listen to them when they say, “But would she do that?” They are deep in the character’s skin. Take an acting class.

A: That you can ask me anything and I will try to answer to the best of my ability. I love mentoring. I am a passionate teacher. I’m insatiable. I’m shy. I’m very self critical, but I’m pushy. Yoga helps. dianaburbano@icloud.com

***For more on Diana Burbano, see: