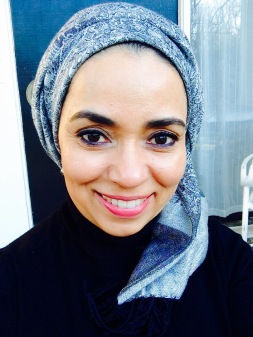 MFA from Tisch School of the Arts Dramatic Writing Program.

Q: How do you identify?

A: Over the years, I have called myself different things: Mexican, Latina, Latinx, Mexican-American, Jewish, Sephardic, Jexican, observant Jew. It depends on the context. Most days, I’m Mexican with Jewish lenses.

Q: Tell me about your Never Mess with a Mexican Girl.

A: Never Mess with a Mexican Girl (Orgullo Festival, Theatre Nuevo St Louis, MO) is a saucy twist on The Little Red Riding Hood fable. Little Roja is sent on a mission to cross El Rio Grande to deliver food to her abuelita who cannot get out to do her marketing. On her way there, she meets a rock star, El Gran Lobo. All the sexually hungry wolf wants is to take a bite out of her! He meets up with her at abuelita’s house only to find that Little Roja is smarter than he presumed. To save her life, she blasts him away with her diamond studded gun because she’s a real chingona! I had to cut out the woodsman role because who needs a man to save the girl?

A: The Artist’s Way. I do my morning pages every single day. It’s the best way to gain clarity.

Marrying In  is a play about a Jewish interracial ( black/white) couple living in an insular Orthodox community, taking place post Baltimore riots. Their place in the community is called into question when a racist incident prompts them to question where they belong. This play has received two “closed readings” at 24/6 Theatre company.  A scene from this play was in the showcase for Association for Jewish Theater (St. Louis, MO).

Mentl (yes, the “a” is missing) is a short play about a young Jewish girl that gets labeled as “problematic” in her Orthodox school when she draws an abstract, nude portrait of her mother for her Mother’s day project. Her parents place her on medication and send her to therapy for being too hyper, rebellious, and different from the “other girls.”

A Girl Named Mari is a children’s story about being the only Mexican girl in a majority white school. It’s written in rhyme. I’m really obsessing over this story at this very moment.  My children really liked it and I’m so close to the conclusion.

A Year in Jerusalem. I recently found two volumes of my diaries that I kept in Jerusalem while I lived there for a year, between two intifadas. I’m wondering if I will turn them into anything different than what they are—simple journal entries. Editing is in order for sure! I edited one entry and was pleased with the results.

A: There have been many moments but I’ll share three:

1) Seeing two plays—Simply Maria, or the American Dream by Josefina López and How do I know I’m supposed to be alive by Evelina Fernandez—changed the course of my life. After I saw those shows, I walked out of the theatre knowing I would not go to law school and that I would put my efforts into playwriting.

2) My first production of Kosher with Salsa was very well received in Baltimore. When I saw the line going out the door of Fells Point Corner theatre and 70 people had to be turned away on closing night, I knew that I was onto something. I received a beautiful fan letter telling me that they would pay for tickets to see it again.

3) I recently saw Centerstage’s production of Detroit ’67 by Dominique Morisseau. I went home so electrified I couldn’t sleep! Isn’t that what playwriting should be?

Q: Who have been your playwriting mentors?

A: I haven’t had a mentor (as in the verb). I have had several mentors (as in the noun): Susan Birkenhead (lyricist for Jelly’s Last Jam, Triumph of Love); Yoni Oppenheim (Artistic Director of 24/6 Theater Company); Jesse Freedman; Nahma Sandrow.

I had terrific teachers along the way. Luis Alfaro, Julie Jensen and Ellen Byron were among my first teachers of playwriting. They wrote letters of recommendation for Tisch School of the Arts and soon I was on my way. One way ticket to NYC! While there,  David Ives, Gary Garrison, Shirley Lauro were among my favorite teachers. A super special thanks to Gary Garrison who DID NOT  let me become a part time student.  I graduated on time.  I just wish that I hadn’t been so introverted. If I were to go back in time and have the opportunity to redo it, I would have been more assertive. I may have sought out more Latin@ theatre makers earlier on in my career. Perhaps I suffered from “graduation on the brain”  and future job prospects. How to make a living occupied a lot of my head space. I promised I would never teach children again, but somehow I found myself in special ed.

Q: Who have been my playwriting heroes?

Q: What advice would you give Latin@ playwrights at the beginning of their career?

A: I’m also at the beginning of my career!

If you don’t have time to read my ten pieces of advice, read the last sentence of this section.

This is not in order of importance.

1) Don’t do it for the money or the fame! (I’m almost finished paying off my graduate student loans.)

2) Don’t be discouraged by the inevitable disappointments.

3) Do not be dissuaded by people who may not understand you.

4) Count yourself as blessed if people like your work.

5) Write work that you are willing to champion for years, decades.

6) On most days, inspiration doesn’t come knocking on the door holding a bouquet.

7) Keep on writing even if you only get a couple of good sentences in a day.

9) Stay away from crazy makers. (This term is used in the book, The Artist’s Way)

Cuidate! Nadie te va a consentir! ( I wish!) Translation: Take care of yourself. No one is going to pamper you.

A: I have four children, three boys and a girl. I did not write a sentence for ANY play for over 12 years.  I did complain a lot to my diary. Dear G-d, what has happened to my writing? The sink overflows with dishes. The kitchen floor crunches beneath my feet. I can’t keep up with the spilled cheerios on the floor! These kids take all my energy. I wish for a housekeeper I can’t afford. When will I ever write again?

Those years were so lonely and physically grueling, especially because I was nursing one child, keeping another one out of danger, and driving carpools. Eventually, the words started to bubble upwards from who knows where. Maybe I became a better listener? Finally, after many years, I began to write again.

I learned that with great difficulty comes transformation and transcendence. Use your suffering, trauma, tragedies, sorrows, joys in your writing! As my mentor Susan Birkenhead told me: “Use all of who you are to write your plays.”

I feared having a bunch of children would be my artist’s death sentence. The opposite was true.  They are the wellspring of inspiration and blessing. Most importantly, I developed a heart of understanding.

I look forward to the future. One by one my children are leaving the house. This coming year, I will be down to one! And, I’ll be spending more time in Chicago. Yippee!

***For more on Miryam Madrigal, see: