Posted on September 1, 2016 by trevorboffone 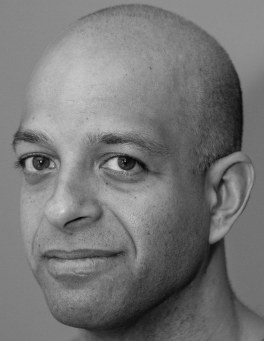 Q: How do you self-identify?
A: Latino; Dominican-American; DOMO; Dominican-York.

Q: Tell me about Eddie’s Perejil.
A: Eddie’s Perejil is a short one-man show about how genocide challenges one New Yorker’s romanticized Dominican identity.

I wrote Eddie’s Perejil out of a physical, emotional, and intellectual desire to both reach non-academic audiences but also tell a story in a different way than what I was accustomed to or trained for. Since I had conducted many years of academic research on the topic I decided to write a one-person show specifically for the 2014 One Festival in NYC: which “creates a platform in which the most diverse, and creative solo performers have an opportunity to showcase their talent…conceived in 2006” by “Festival founder Veronica Caicedo, a veteran of New York’s downtown theater scene has been involved in the direction and production of solo performance theater since 1993.” To my surprise I was selected and was able to perform my play for the first time in front of live audiences four times.

The experience was invigorating, addictive, and challenged the way I presented information. As a trained historian and academic I was used to presenting or “performing” in front of people for years but performing and/or acting on the stage with a script required a new set of muscles and sensibility. The experience was both frightening and liberating–and also exhausting. Rehearsals are like a cardio workout. But I had SO MUCH FUN in the process. A big part of the joy I felt in creating the narrative that I perform was collaborating with my director and friend, the amazing Samantha Galarza who is a trained and professional actor and patiently taught me about the craft of acting and the difference between the former and performing, during countless hours of rehearsal as we analyzed the character and the innumerable backstories in his/her development. It has been a privilege to work with Samantha and also to enter a new genre of storytelling. It has been liberating for me because it allows me to use my skills as a historian to tell stories to different audiences but also be able to acquire a different skill set to tell stories in different and refreshing ways that compliment the academic books. I want to join the number of historians that have used the craft of staged performance to share their research.

This journey has been surreal because Samantha and I always believed Eddie’s Perejil is an important story that cuts across race, class, and gender categories and from the onset we aimed at performing at colleges and universities. Through a good friend and doctoral student, Nehanda Loiceau, we were invited to her institution at Duke University to perform the play which was well received. For me it was a special treat because I performed Eddie’s Perejil before my former professor, Laurent Dubois, and also Professor Walter Mignolo: two eminent scholars of the Caribbean and global coloniality, respectively.  This experience has allowed me to see the power and possibilities of creating communities of solidarity through the power of interdisciplinary research, collaboration, and storytelling.

Q: What else are you working on now?
A: I am working on my second academic book that examines the escalation of ethnic tensions in the Dominican Republic against Haitians as a case-study of how violence and targeted exclusion can lead to mass murder in multi-racial societies. I also offer policies that help reduce these rising tensions. I am also working on a treatment of a future one-person performance about the events surrounding the mid-air explosion of American Airlines flight 587 near J.F.K airport on its way to the Dominican Republic on November 12, 2001—nearly two months after 9-11. All 265 people were killed. Most were Dominican or of Dominican descent.

Q: What have been the defining moments of your journey as a playwright?
A: Being able to tell a story through acting and performance. Learning a new language and accessing different muscles that convey a particular mood to the audience that is completely different than giving a lecture. It has been extremely rewarding and challenging–but worth it. Also, as a trained historian being able to tell a story in a different genre has helped me grow as an educator. It is a humbling experience but I love crafting and performing a play; the process is inherently collaborative and working with others is intellectually and emotionally gratifying.

Q: Who have been your playwriting mentors and heroes?
A: My playwriting mentors and heroes are those that I have come to know as a casual audience member throughout the years such as Neil Simon, August Wilson, John Leguizamo, The Teatro Campesino, Anne Deavere Smith, Sarah Jones, Robert Bolt, and Shakespeare. I would be remiss not to mention my director Samantha Galarza whose guidance and support is a major reason that Eddie’s Perejil came to life. I could not have written and performed the play without her.

Q: What advice do you have for Latin@ playwrights at the beginning of their career?
A: Write it down. Share it and collaborate with others.

Q: What else should we know about you?
A: I am married to an academic and have two kids. Two years I started to surf and have fell in love with the sport.

***For more on Edward Paulino, see: