Posted on February 6, 2017 by trevorboffone 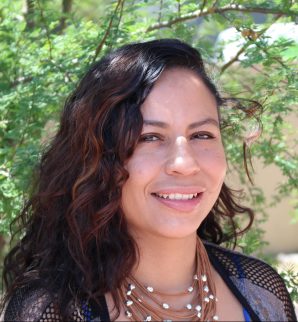 Hometown: I’m from various places. Usually say the Bay Area, and sometimes I claim Oakland because that’s where I came of age.

A: My academic answer is 1.5 generation Salvadoran-American. My go to used to be Chicana because it has the political connotations I’m looking for and most people are familiar with the term. But Salvi maybe a better fit since I’m Salvadoran. It’s complicated.

Q: Tell me about Más.

A: Más focuses on the people in the movement to save Mexican American Studies (MAS) in the Tucson Unified School District (TUSD.) The MAS curriculum centered around reclaimed Indigenous epistemology. Más uses this epistemology as the device of the play. The play is set in a sweat lodge and takes place in the collective unconscious of the characters involved in the MAS movement. Audience members enter the theater as they would a sweat lodge and are smudged with sage on the way in (if they choose and if possible). The play consists of four rounds that are marked by four energies of the Mayan cosmology, played by dancers who accentuate some of the scenes in the play. The dancers mark the four rounds with short solos that end in the pouring of water over the book-stones. The book-stones are the original seven books banned by TUSD.

Más was developed through a National New Play Network (NNPN) playwright residency at Borderlands Theater. The end of Más was devised with the original cast for the world premiere under the direction of Borderlands artistic director Marc David Pinate. He’s my partner and Más was originally his idea that I took on and we developed as a team. We had tried different things in previous readings but hadn’t quite found it. The Borderlands Theater world premiere was an immersive and authentic experience in the ways of the Chicanx. Más premiered to sold-out houses, with long wait lists. If I thought I knew the importance of reflecting communities back to themselves, I really saw it in action with Más. The interviewees that saw the play, even some of the initially skeptical people, were grateful that the play validated their experience and portrayed their story in their own words.

Shortly after the world premiere, Más was co- produced by a diverse group of folks at Laney College and Ubuntu Theater Project in Oakland with two separate runs. What I love most about those productions was that the cast and crew became familiar with what it means to be Chicanx. Some college students drove an hour and a half from the South Bay and San Francisco to see the play. My favorite comment during the talkback was, “We get to see intelligent and college educated Latinos on stage.”

Borderlands Theater’s production is on an Arizona university tour. Más is being produced at Su Teatro in Denver this March. Tony Garcia directs!

A: I’m playwright/director on Solving for X, a devised play with the Working Classroom. The Working Classroom’s method of creating is ensemble based. Mostly made up of youth who are accustomed to devising. I’ve been involved since June 2016. I came out to facilitate a couple of two- week workshops leading up to the play that I am writing based on the devising. As playwright, I provide exercises to create material. I observe and take notes. Then I keep what resonates with most of us and shape into a script. As director, I create the map for the ensemble to play within and in some cases edit the play as we go along. My job is to create the vision for the cohesive piece.

Working on a devised piece reminds me of the movement exercise: Leader, Neutral, Follower. The exercise is about following the flow, organically and continuously switching between the three while working together. Devising is about knowing when to step up and step down for all involved. I’ve found that communication is key in figuring out the personality of the group. And that’s when the magic happens.

I’m really excited about the work we’ve created. We’ve created an image driven, movement based, flash vignette play that is audience interactive. The set is made up of minimal parts that are moving props; choreographed transitions that sometimes involve desks and blackboards. The play wrestles with the education system, the commodification of students, inequality and agency. Solving for X previews February 16th at the National Hispanic Cultural Center in Albuquerque!

I’m also working on Sanctuary, a play about a Salvadoran woman with ganas, who ends up being the catalyst for the 1980’s Sanctuary movement. Based on real events, the play is my take on how this true-life movement took shape under the leadership of lawyer, Margo Cowan, her partner and historian Lupe Castillo, reverend John Fife of Southside Presbyterian Church and Quaker Jim Corbitt. It’s about a group of everyday folks who choose between the law of men and the law of God. The play’s first scene is based on a newspaper article I found while researching. Twenty-six middle class Salvadorans attempted to cross the border in the worst stretch of desert, Organ Pipe Cactus National Monument. The women were in makeup, silk stockings and heels. The photos in the article haunted me. One of them shows a young woman, dark, with Mayan features, high cheek bones and deep set eyes, the suffering worn on her face, yet still attractive with this determined survivor’s edge about her. She was one of the thirteen that survived. She’s the inspiration for Yolanda in the play.

I learned about the 1980’s Sanctuary movement from Lupe Castillo. As I interviewed her for Más I was immediately hooked and the play idea marinated for a couple of years. Then Marc David Pinate and I had a conversation regarding the play idea and the play was conceived, much the same way Más was conceived. After researching and interviewing, the play began to reveal itself further. I’m working to finish the first messy draft. This play about compassion is even more relevant in the current political climate.

I have a father/daughter play that I want to get to but it scares me a bit, so I’m slowly marinating on it. Sometimes I hear characters talking and I take notes. Who knows if I’ll find the notes later but it helps the marinating process.

Good thing I have a month long residency at The Djerassi Program!

A: Watching John Leguizamo live circa 2001, made a career in theater seem possible to me. Reading about Anna Deavere Smith and Twilight: Los Angeles, 1992. I hunted down a copy of Twilight: Los Angeles HBO special vhs that I still have! I’d mostly written fiction up to that point and started experimenting with Ntozake Shange’s style of choreopoem and writing monologue style spoken word pieces. Teatro Vision’s Teatro week intensive workshop made a huge impact. We were housed in San Jose and made theater all day. Immersed in learning and practicing in the style of Luis Valdez and El Teatro Campesino, Augusto Boal and Theatre of the Oppressed. As someone who dabbled in dance, I fell in love with Image Theater and telling a story non-verbally. My mind was open to all kinds of possibilities. I wrote, produced, and performed a one-woman show, Scatter My Red Underwear, and toured it around the Bay Area. I learned while doing. My solo show incorporated text, video, movement, and music. I was very influenced by the hybrid theater movement going on in the Bay Area especially by Campo Santo, Erika Chong Shuch, Marc Bamuthi Joseph, CounterPulse. Devising with the HyPE theater troupe and Las Manas Tres. Performance art/movement workshops with Violeta Luna and Sarah Shelton Mann. Collaborating with artists in the Bay. Getting my MFA at Northwestern University refined my craft in playwriting and gave me the opportunity to explore and understand other mediums.

A: Try new things. Collaborate and Devise. It opens your mind. Figure out what works for you. Work on your craft. As a working mom I struggle with this and make it happen. Sometimes I take a break from writing for a couple of months or so because I have to focus on running a theater and taking care of my child. And that’s okay. Having a baby changes things. It’s not impossible but know that you will produce less for a few years. It helped that I had things going on so it was necessary to jump back in. Keep doing your thing. Go into theater knowing that you most likely won’t make a lot of money, so make sure it’s rewarding or paying off somehow. And/or you can always marry well. But seriously, how do we change this?

A: I have a half-finished pilot, a dramedy I started in grad school that I used to think about finishing sometimes. It follows the lives of four women bartenders at an Oakland bar. The main character is trying to reconnect with the father she never met. It’s fun, sexy, and soapy and uses hip hop/R&B and the Oakland vibe as a backdrop. (I wrote it before Empire. They could be distant cousins.) I have a female lead coming-of-age screenplay set in the 90’s that may be fun to revisit.

I’ve been through some ish. Experienced interesting places and re-invented myself a few times over. Maybe someday I’ll write a memoir titled Salvi. I wrote a solo play in grad school about the selves I’ve been, like consumer me, party girl me, militant me…. It’s about reconciling my bi-cultural reality and coming to terms with the real me. It’s easy to wander around lost when you’ve been transplanted and your roots don’t quite take hold.

Pitching Más to Borderlands Theater’s founder Barclay Goldsmith lead to my partner Marc David Pinate and I inheriting Borderlands Theater. You never know where a project can take you. I hadn’t considered running a theater. And I feel like everything I’ve done has prepared me. It’s the most challenging thing I’ve done, requires the most work and discipline, and we believe in what we do.

*For more on Milta Ortiz, see: