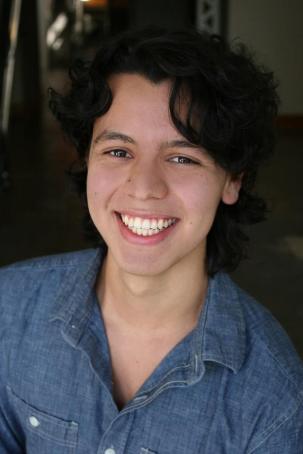 A: I’m a Latino DREAMer, a DACAmented Salvadoreño. I was born in El Salvador and came to the United States when I was five years old. At this point in my life I’m really trying to strengthen the connection with my cultura Salvadoreña.

Q: Tell me about Horses and Cloth.

A: Horses and Cloth is a 10-minute play with two strong female characters, one Iranian and the other American. When the Iranian government decides to force all female competitors to wear hijabs at the World Women’s Chess Tournament in Iran, the American Grand Champion decides to boycott the tournament. This shocks the Iranian up-and-comer who has long dreamed of besting her hero in a game of chess. It’s an exploration of feminism across cultures.

A: As part of my Italian major, I’m beginning an independent study to write a full-length play in Italian. The current direction involves an Italian Muslim museum director grappling with faith, art, and identity in the aftermath of an extremist suicide bombing ended several lives and severely damaged a priceless piece of historical artwork. I was inspired by the Italian documentary Fuocoammare which captures life on an Italian island that is on the frontlines of the European migrant crises.

A: My journey as a playwright is still in its early chapters; I haven’t even graduated college yet! Most of my work has yet to see the light of day and remains churning inside my computer’s hard drive. However, I’ve been very thankful and fortunate to have Horses and Cloth be my debut as a playwright. As of now, it has taken me as far as New Jersey and Las Vegas. In January 2017, Horses and Cloth received its first staged reading at the Region 2 Kennedy Center American College Theatre Festival (KCACTF) in New Jersey where it became a finalist to be considered to receive a staged reading at the National Festival in the Kennedy Center. Then in August 2017, Horses and Cloth received a second reading at the Association for Theatre in Higher Education (ATHE) conference in Las Vegas, Nevada where it continued to evolve and grow. It has been exhilarating, humbling, and creatively enriching to continue working on this show that is so important to me.

A: I wouldn’t even be able to call myself a playwright if it wasn’t for my wonderful playwriting professor Ingrid DeSanctis. I also love the works of David Ives, Stephen Adly Guirgis, Carlos-Manuel, Lin-Manuel Miranda, William Shakespeare, and Annie Baker.

A: I guess this isn’t so much advice, as much as it is the things I’m trying to instill in myself. Keep a notebook of your ideas and concepts. Write down the quirky bits of dialogue you have with yourself in your head. Listen to people talk, eavesdrop, and write it down. You don’t have to write perfection the first time, write a bad first draft. Find and read transcripts of legal depositions if you want to know how real people talk. Trust me.

A: I speak Spanish, English, French, and Italian fluently and learned them in that order. I’ve done professional voice over work for National Geographic, Rosetta Stone, and other local commercials. I have done improv for 8 years now and am hoping to continue doing that throughout my life. I have been thrust into the world of grassroots political organizing following a petition I started to make James Madison University a sanctuary school. I love to travel and have been fortunate enough to study at the University of Edinburgh and the University of St. Andrews through a study abroad program at JMU. I’m also interested in doing a lot of theatre that focuses on Latinidad after I graduate so if anyone knows of theatre companies that do that kind of work, let me know! I’m still learning a lot about professional Latino theatre and any guiding arrows are more than welcome.

This entry was posted in Uncategorized. Bookmark the permalink.