Posted on February 19, 2018 by trevorboffone 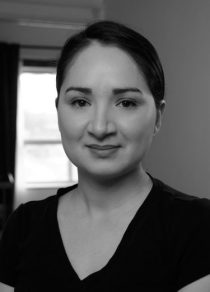 Current Town: Hamilton, Ontario (lived in Toronto for most of my life until three years ago)

A: My most recent play is still very much in progress but it basically tells the story of a Chilean family living in political exile in Canada who travels to Europe in 1979 to become part of The Return Plan, an international effort to topple the Pinochet dictatorship from within. The play features three children who are the main storytellers by using shadow puppetry and stylized choreography to tell the history of Latin America from conquest onward and trying to make sense of the family’s own story of exile. It is influenced by my own family’s story and my main question as playwright is to try to answer the question, what does exile do to a person after forty years? How do we reconcile revolution within the confines of a family unit?

A: I am currently in the midst obtaining my MFA in Creative Writing with a focus on playwriting. I am working on a stage adaptation of the novel Signs Preceding the End of the World by Yuri Herrera and a very loose adaptation of Lorca’s Blood Wedding set in rural Ontario featuring migrant workers and members of the MS13. Other plays are percolating but are too fresh to talk about. Am also writing short stories and poetry (and my god do I have a profound respect for poets!)

A: There are two. In 2003 when I was “just” an actor I had been hired to be part of a workshop reading of The Refugee Hotel by Carmen Aguirre. It’s a very long convoluted story but basically the gist of it, the world premiere was going to be cast with an all white cast (except for one Latinx actor playing a mute character). I quit acting (out of anger) and decided to start up my own company, Alameda Theatre Company. I wanted to make sure that we created work that featured Latinx artists in the central roles (as actors, playwrights, directors and designers). I wrote my first play during this time as well, Three Fingered Jack and the Legend of Joaquin Murieta. I then produced the real world premiere of Carmen’s Refugee Hotel. In 2009 we opened the play featuring an all Latinx cast to rave reviews. Running my company for over ten years was one of my most rewarding experiences as an artist. But what began to happen was that because I was doing all of the work by myself (lack of funding did not allow me to hire the proper staff that would have kept me afloat) I had to close down the company in 2014. I realized that I had been giving everything I had in me to this company and other artists but I was failing the one artist that should have been top of mind: myself. I am back at school getting my MFA so that I can begin to create my body of work and continue to move the Latinx experience forward through my own work.

A: Carmen Aguirre, one of my best friends and a writer that I admire so much. Her work gave me my own story of exile back to me. It was the first time that I was able to see my life and my parent’s experience of exile on a stage. Guillermo Verdecchia is another mentor because his play Fronteras Americanas allowed me to see myself (as a Latinx artist) on a Canadian stage. Again, because of the lack of work by Latin Americans in Canadian theatre, these two playwrights made me realize how important it was to see myself on stage and to pursue work in the theatre.

A: As I sit here writing these words, I think a lot about how I worry about getting a play right the first time. I have learned that first drafts are meant to be shitty and writing is about evolution. It’s the rewriting that is the most important. So don’t worry about first drafts, keep writing. Also, value where you come from. Fight for your voice to be heard and be proud of that voice. And remember, each and every one of us is unique; there is no other “you” out there. Honour that.

A: I love theatre so much. It is the only place where I can truly express myself. I love the collaborative nature of theatre. Being in an MFA I realize how lonely the other genres are; fiction and poetry are beautiful writing genres but they are very lonely. In the theatre we write alone but then we need to have actors, directors, designer and an audience to make our work come alive. That is the magic for me. Collaboration. I am so grateful for this practice and for all of the people who have come into my life because of theatre. My children really fill me with the wonder of life and creativity and it is for them that I continue to do this crazy thing that we call theatre because without wonder and creativity there would be nothing.

Fun fact: I got off Facebook on January 1, 2018 and it has been one of the best decisions of my artistic life!

Fun fact: I used to be so, so scared of dogs, then last year I decided I needed to get a dog, to face my fear. I don’t know how I lived without dogs in my life for so long! I now have a Vizsla named Saga (after the character in the Danish tv series The Bridge (Broen))