Posted on October 1, 2018 by trevorboffone 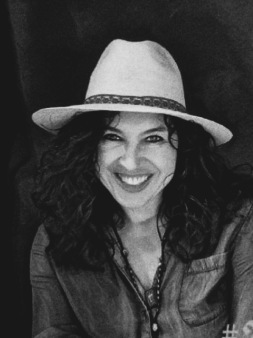 Q: Tell me about Scratching the Surface.

A: Most recent play: Scratching the Surface, a ten-minute short play produced and staged at Casa 0101 Theatre with The Brown and Out LGBTQIA Short Plays Festival early last year 2017.

A: Once again will be a part of the Brown and Out Short Plays Festival starting this Fall.

A: Don’t let anyone discourage you from writing your truths. Like Josefina Lopez once said to me, and I’ll share with all y’all “Write what you know,” and I’ve been doing that ever since.

A: I was born and raised in Boyle Heights, in the Aliso Village Housing Projects by a single parent on welfare: my mother Elvira Valdez Medina, from Villa Guerrero, Jalisco, MX.  I was in and out of juvenile hall; I slanged, shoplifted, and stole cars for fun. Did lots of drugs.  I turned my life around when my mother was in an accidental fire and she became blind a few years later. I became a journeyman, heavy equipment operator. I’ve been 16 years chemically free. I took care of my mother till the day she passed at home in 2009. I’ve written two full-length plays, numerous short plays, and last year, 2017 one of my monologues, Matriarchy, was made into a short film with Rosa Navarrete (Director/Producer), who was inspired and wanted to film it, alongside Lauren Ballesteros (Actor/Producer), who performed it and me (Writer/Co-Director/Producer.) The Matriarchy Short Film got accepted into the Chicano International Film Festival, Santa Fe Springs Film festival, was invited to perform the monologue at the Highland Park Film Festival with Lauren Ballesteros performing it. It also screened at various festivals, art galleries and at the Schwules Museum which exhibits LGBT life in Berlin, Germany earlier this year, 2018.

***For more on Patricia Zamorano, see: