Posted on November 19, 2018 by trevorboffone 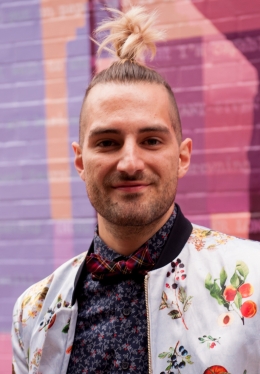 Hometown: Disputanta, Virginia [which is just as terrible as it sounds]

Current Town: Philadelphia was my artistic home until a few months ago, when I moved to St. Paul because of a badass fellowship at the Playwrights’ Center.

Affiliations: Co-Founder/Creative Producer for On the Rocks, a Philadelphia based fringe-company; alum of PlayPenn’s Emerging Playwright Group, The Foundry; 2018/2020 Core Playwright with Interact Theatre Company; 2018-2019 Jerome Many Voices Fellow at The Playwrights’ Center.

Q: How do you self-identify?
A: Queer Puerto Rican-American (slowly evolving into Jennifer Lopez). I’m also half-white so that’s a thing [thanks, Dad].

Q: Tell me about Wolfcrush: A Queer Werewolf Play.

A: Wolfcrush: A Queer Werewolf Play is a project that I’ve been developing with On the Rocks, my theatre company in Philadelphia, for just over two years. Elaina Di Monaco, who is my art-wife/soul-mate/collaborator, and I co-founded On the Rocks, because we weren’t seeing ourselves onstage. We wanted more queer bodies doing queer shit in queer friendly places. And it’s important to me to really engage and connect with queer humans of color and their experiences. So we started creating these late-night, BYOB, theatrical dumpster-fires and presenting them during the Philadelphia Fringe Festival. Over the past few years, we’ve developed a helluva cult following and this year was no exception.

Wolfcrush: A Queer Werewolf Play is a beast of a play [pun]. It’s a three-act, three-hour messy play that is full of werewolf transformations, teenage angst, and sex scenes. Literally every kind of sex: girl on girl, boy on boy, girl on boy, wolf on boy, wolf on girl, wolf on wolf. It was a different kind of play for me, because it was so plot-heavy. The first act is literally like live-action, gay Riverdale. It’s just a bunch of teenagers navigating sex and relationships in the shitty town of White Coon County, Virginia. Meanwhile, the livestock is going missing. The second act is a complete tonal shift and plays out like a police procedural. Which brings us to the third act, which is a completely different world. It’s a fever dream full of sex and violence and werewolves. It’s a play that isn’t easy to pitch to theatres. It’s one that I knew I would have to self-produce, which I have learned to embrace.

The blurb…
White Coon County, Virginia is about as terrible as it sounds: there’s a (Super) Walmart, a swamp, a dozen churches, so many guns, and acres and acres of farmland. Nothing much ever happens here, until the livestock starts getting slaughtered. Slaughtered by something big: big and mean.

The Mayor’s never dealt with a crisis like this and he’s offering Walmart gift cards for answers; the Detective is getting investigative tips by watching Law and Order SVU marathons; the Principal is snorting lots of coke; and to make matters worse: Billy Wilkerson (an outstanding student of White Coon County High School) has gone missing.

Junyce is new and the prime suspect because she punched Billy in the face on her first day. Or maybe Kyle, the ex-girlfriend, is involved? Or is it Huck, Kyle’s new jock-boyfriend? Or could it be Beecher, Billy’s shy study partner? Junyce, Kyle, Huck, and Beecher aren’t concerned with Billy. They’ve got bigger fish to fry (or in this case: bigger wolves to hunt?). The teens keep secretly sneaking off to the woods. What are they doing in the woods? And what is slaughtering the cows? And where the hell is Billy?

Wolfcrush is a queer full moon fever dream about cannibalism, werewolves, small-towns, big secrets, first times, sloppy seconds, Mariska Hargitay, and all the lies we tell ourselves to sleep at night.

I grew up as a gay Puerto Rican in a really shitty part of Virginia. At four years old, I knew I was gay as blazes. In high school, when I started experimenting with my sexuality, I remember all the rules and parameters that my partners and I had about sex. My first sexual experiences were clumsy, secret, coded escapades that happened deep in The Woods in-between watching Saw marathons and blasting Lady Gaga’s first album. Giving a blow-job during Saw IV while simultaneously lipsynching “Poker Face” isn’t ideal: it’s weird and sloppy, but also kinda hot. All of my partners in high school were also men of color and we established so many rules that made what we were doing “not gay,” If we didn’t “kiss” then it wasn’t gay, it was just a handjob. If we didn’t cuddle after then it wasn’t gay, it was just casual oral sex. Stuff like that. Wolfcrush is about all of those rules and navigating queerness while living in a place that doesn’t accept said queerness.

Q: What else are you working on right now?

A: Oh my god—so many things. Since I’m fortunate enough to be spending the year on a Playwriting Fellowship, I’m working on like a million and one projects. I’m a Core Playwright with Interact Theatre Company in Philadelphia and our Core Playwrights’ Weekend is in December. I have this play that I wrote like four years ago, Rhonda’s Dad Dies in the End/Nobody Really Cares/He’s a Racist/Anyways. And a lot can change in four years, so I’m completely gutting it. It’s a huge-three act monster of a play about queer relationships between men of color, hate crimes, high school wrestling, fight clubs, diversity training, privilege, and Jon Benet Ramsey.

In January, I’m going to be workshopping my play the shed, the fire, and what they found in the ashes [a gothic ghost story] at The Playwrights’ Center. It’s the darkest play I’ve written and it’s my response to the dead, straight, white-guy play as a living, gay, Latino guy. So there’s a patriarch and a death and secrets and all that other stuff you come to expect, but with a supernatural element.

Intermittently throughout the year, I’m working on my next project with On the Rocks for Philly Fringe 2019. I’m still piecing together the plot, but it’s called A dude was fucked & left for dead in the woods. He died. I’m getting sick of the dead innocent-beautiful-woman(but we’ll call her a ‘girl’ for marketing purposes) trope. I fuck with Gone Girl, don’t get me wrong. But it’s starting to get a little played out. This play is my attempt to invert the trope.

Like most writers, I pull a lot of my inspiration from my life and what I’m experiencing and right now my interests lie in threesomes, poly-relationships, and toxic masculinity (my current sex life in a nutshell). I’m working on a play called The Hunting Trip about three “straight” guys who get together every year for a hunting trip. And over the years, they develop a sexual and emotional relationship with each other that only exists while they’re on this annual trip. And everything has been cool, but this year shit hits the fan. I have a lot of friends who are currently in poly relationships and it’s something that I’m really interested in unpacking for myself.

A: God. I mean. I was such a little weirdo growing up. Like my parents definitely thought I was going to be a serial killer, which might have been more practical than this playwriting thing…

In addition to being queer and Latino, I was an only child and I grew up to professional bodybuilding parents on a 103-acre plot of forest in the middle of nowhere. So: shit was bound to be weird growing up.

One of my favorite things to do was to play Crime Scene Investigation in my shower. Along with soaps, loofahs, and shampoos, my shower shelves were stocked with an industrial-sized box of latex gloves, a scalpel (I got it from a chemistry set), a one-gallon bottle of fake blood, and a tub of Vaseline (to congeal the blood). I would take the blood, dump it on myself, and find an interesting way to lie in the tub as a murder victim. After I found a suitably ghastly way to lie in the shower, I would stand up, wash the blood off of me, strap on my latex gloves and become the investigator of the crime. I would juggle these roles back and forth in the shower until all my hot water ran out. Sometimes I was a hooker who was bludgeoned in an alley, other times I assumed the role of the young boy that tragically fell from his bedroom window. I’ve been the cop investigating the crime, or the medical examiner dissecting the victim. That’s what I did from ages 7-11.

I did this for a couple of reasons: 1) Law and Order SVU was just starting up and I had a huge seven-year-old hard-on for Chris Meloni. Because goddayum, that man is fine and 2) I’ve always been obsessed with the horror genre. One of my parents’ friends bought me the VHS of Scream for my sixth birthday and I watched that fucking movie three and four times a day. So my aesthetic is deeply rooted in small-town horror. My goal when I write is to take our skeletons out of the closet, throw a thin layer of skin on them, and treat them to a cheap dinner at Chilis. That’s my goal. And it all started with a seven-year-old playing Crime Scene in a shower.

A: I have had so many incredible mentors and heroes over the years. When I was seventeen, I got to do a three-week residency with Caridad Svich (which was INSANE) and she is the first person that taught me about playwriting. Learning it from a Latina was a huge moment of: O, shit…this is something I can do. She taught me to never settle and make your plays impossible, poetic, and unapologetically your own. Lessons that I carry close to me every day.

I spent a semester at the National Theatre Institute (The O’Neill’s training program) and Marcus Gardley was my instructor. Spending a semester with that man was life-changing. I’m still writing plays because of all the shit I learned from him. It was a transcendent experience.

Philadelphia was such a community for me and still my artistic home. So many people in that community championed my work and my aesthetic and I think my brand in Philly is strong because of how many cheerleaders I had while I was growing up as an artist there.

And now, I have the support of the Playwrights’ Center. It is so obvious to me that everyone that works at PWC cares so much about the playwrights. It’s the most magical place I’ve ever been. I wake up every morning and feel honored to be here. Jeremy Cohen, who is the Artistic Director, runs the organization with kindess and generosity and care. He’s an advocate and a friend.

There are so many playwrights that make up my artistic genealogy: Sarah Kane, Shelia Callaghan, Greg Moss, Quiara Hudes.

Q: What advice do you have for Latinx playwrights at the beginning of their career?

A: I recognize that I have an enormous amount of privilege as I pass for white and that is something I have some shame attached to. I’m also working on learning Spanish because I think it is super important to connect to that part of my heritage. Where I grew up it was only cool to be straight and white. Whiteness is indoctrinated. I feel like I’ve been apologizing for being Latino for a long time. I’ve been ashamed because I always felt like I was taking up space, because I’m not Latino enough—not brown enough. I’m done being ashamed. This is who I am and I’m proud as shit.

***For more on Haygen-Brice Walker, see: