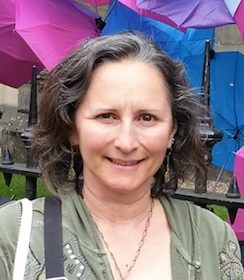 Q: Tell me about The Pet Play.

A: This is a comedy about pet owners who obsess over their pets, and end up valuing their pets’ perspectives and feelings and needs more than their human being friends and family. The lead characters are a married couple. The wife feels a little lonely and finds this stray cat. She begins to really dote on it to the exclusion of her husband. The husband, on the other hand, is working really hard so they can afford to have a child. He really wants to be a father. When he reaches the point of frustration because it seems the cat has replaced him in his wife’s eyes, he brings home a dog. Things go downhill from there. Eventually, they learn that the unconditional love the pets seem to offer, is conditional after all and that unconditional love is something you give, not receive. DQT is producing it June 14 – 24th, directed by David Davila, and we have an amazing cast, crazy talented puppet designer and builder, and the puppets are going to be soooooo cute!

A: Also working on Promesa (with composer David Davila), a musical about the Catholic Faith tradition of the pilgrimage to the Shrine of Our Lady of Guadalupe, in Mexico City. It is a story of one family’s faith in the Sacred Feminine, that spans three different time periods (the beginning of the Spanish Conquest of Mexico, the Mexican Revolution, and 1985), and has three protagonists: an Aztec healer, a nurse in the revolution, and a doctor. All three women have different visions of what the Sacred Feminine is, but all three draw strength from their unique vision, and make their own pilgrimages, and discover their own truths that help them overcome the challenges of seeing her traditions rapidly disappear (Aztec), war (Mexican Revolution), and losing her mother to AIDS (1985).

A: Winning the 2015 New York Musical Festival Special Award for Social Relevance and Impact, learning to produce and fundraise for my shows; every production really is a defining moment, as each one feels like such a triumph against the odds (see “The Count” – a study done by the Dramatists Guild and the Lilly Awards)

A: Find a great mentor, make lots of friends (future supporters and audiences of your plays as you get started), and produce your own works-readings, whatever, and don’t be afraid of putting on the “promoter” or “producer” hat in order to get your work out there (see “The Count” again: 3.4% of productions go to playwrights who are women of color, so this is especially important for us Latinas, since we have about 1/2 the chance a Latino playwright has of being produced). Join a good, solid group committed to diversity, and a group that when confronted with evidence of a potential bias, is willing to correct the bias immediately.

A: I like to make people laugh, because humor connects us deeply.