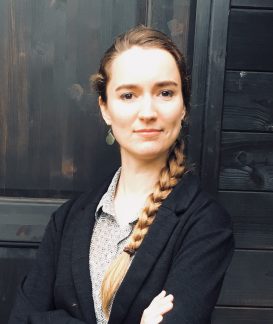 Affiliations: Just graduated from the MFA program at the Michener Center for Writers, UT Austin. Now at large.

A: Latina, Argentine-American, Argentinian and American.

Q: Tell me about YOU/EMMA.

A: YOU/EMMA is a postmodern fever dream crashing Flaubert’s Madame Bovary into a future that’s female. It had a wonderful run as part of IRT’s 3b development series this past April, produced by Wandering Bark Theatre Co. I met Valerie Redd (the actress who conceived the show) ten years ago in acting school at LAMDA. When she called me up and suggested I write a one-woman version of Madame Bovary, I was like “Sure! But it’s going to be entirely in second person, and every time Charles Bovary talks it’s just going to be the sound of a cow mooing!” Amazingly, she went along with it.

While I was writing the piece, I kept reading passages out loud to my husband Enrique Lozano, and he kept saying “This is going to be really hard for the actress.” And I was like “Val can handle it!” I couldn’t be in rehearsal because I was finishing grad school, but when I showed up at the theater the first thing Val said to me was “This is the hardest thing I’ve ever done.” So maybe I should’ve listened more to Enrique. But Val really knocked it out of the park.

It was one of those charmed processes where everybody brought their aesthetic and ideas to the table and created something none of us would have made on our own. Val’s acting sensibility is deep, emotional, and sensitive, where my writing default (especially dealing with Flaubert) is much more ironic. Devin Brain, the director, navigated those impulses in a way that made them both stronger—where things I had written could have been clever, they became profound—while never losing the humor of the piece. And he worked along with the designers (Jess Greenberg, BP Houle, and Kate Eminger) to build a wonderful world for Val to play in, with the tech essentially becoming her acting partner.

A: I just finished up a new draft of my play Milton, MI. It’s about threesomes, slugs, and poetry. Leah’s got writer’s block, Amber’s got ambition, and Jake’s got it all (including your regular fear of slugs). Jake and Leah were young up and coming hotshot poets when they left NYC for Jake’s professorship at Milton Technical University. Now Leah’s working admin while Jake’s career skyrockets. So when fresh-faced Amber shows up, it’s only a matter of time before things get sticky.

I wanted to write a play about highly articulate people who can’t bring themselves to say what they want, which has made for a challenging revision process. It’s a strange balance between making sure the audience can see what’s going on even though the characters are trying to hide everything they’re feeling from each other. I got to work on this play as part of UT’s New Theater festival, which gave me a great chance to hear an audience’s responses and get notes from a whole bunch of very smart people, and I’m super excited to have been selected as one of the six plays featured at the Latinx Theatre Commons Carnaval of New Latinx Work this summer; that reading will give me a wonderful opportunity to dig deeper into the piece.

A:  In 2012 I was on a Fulbright in Buenos Aires. I’d cut my teeth in the NYC devising scene after undergrad, and had always felt like writing a play all by myself would somehow be selfish—like it would somehow eliminate the input of my collaborators. But I found myself alone in a new city, and realized that my writing was actually a calling card and the best way to find collaborators. I started calling myself a playwright then, and have continued to learn about all the ways that collaboration continues even if there’s a written draft before rehearsals start!

A: Mentors: Steven Dietz, Kirk Lynn, Liz Engelman, Stan Lai, and my mother, Sharmon Hilfinger. Heroes: Grupo Krapp (dance theater from Argentina), Young Jean Lee, Sarah Ruhl, Diana Lynn Small, Federico Leon, Fabio Rubiano, and Enrique Lozano (my first reader, life dramaturg, and aforementioned husband). Enrique combines a profound understanding of the psyche with a voracious curiosity about theatrical form. Every play of his springs from a different experiment, and while they often share a similar kind of humor, he’ll often show me new work and I’m like “are you sure you wrote that? It’s not like anything else you’ve done!” I admire his refusal to decide what kind of plays he makes or let anybody else tell him what it is he does.

A: Get into rehearsal rooms of other people’s projects, whether it’s as an actor, assistant stage manager, director, dramaturg—however you can and want to. It’s so important to hear plays, not just read them. Spending an extended period with someone else’s work will make you understand the mechanics of playwriting differently.

Buy your friends pizza and ask them to read your play to you. And don’t be afraid to self-produce at whatever scale makes sense for you. Write a play for a backyard or living room or church basement or the coffee shop you’re working in. Theater can happen anywhere.

A: I’m also a translator and a novelist! Enrique and I have started a translation project called Grande/Bravo, putting contemporary Latin American theater in dialogue with contemporary American theater. We started by translating Kirk Lynn’s Fixing King John into Spanish, and are working on a translation of Fabio Rubiano’s Mosca (a deeply political adaptation of Titus Andronicus). We picked these two plays to start out because they both take a similar irreverent and dark approach to adapting the Bard. With Kirk’s piece, we worked with a festival and a theater company in Colombia to get a couple readings going, and a workshop production came out of one of them. Kirk was able to come down and see the two readings, which was great. We’re hoping to do something similar in the US with Mosca, once the translation is finished. Reach out if you’d like to help set up a reading!